Little E is 16 days old. His family is trying to get across a rocky river bed. Mama Little E is walking slowing and seems to use her Trunk to check out the safety of the substrate. Little E is Tail-Raising in response to a new frightening situation.

Mama Little E slips and falls and lands on Little E. No wonder they have been so careful! Little E roars, someone snorts and females by rumbling and Tail-Raising. Latino whirls around and Redirects-Aggression, Standing-Tall and Kick-Dust, Foot-Scuff, and Head-Dip-Touch-Ground as they check to see what the problem was - check out the rocks as if to see what went wrong! Latino and Lorato and V-Notch all touch little E. (Maasai Mara, Kenya) 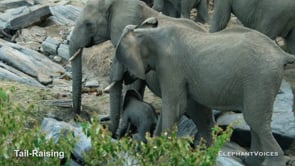