A short (typically less than a second in duration), sharp, noisy, broadband sound produced by purposefully blowing air through the trunk. Elephants may Snort when they are surprised or annoyed by something, or indignant about something another has done, or during intense social excitement. In these contexts Snorts may be less explosive Trumpets, which are also given in similar contexts. Elephants may also Snort apparently to alert other members of their group to a new situation.

A Snort is audibly distinguishable from the more common Blow or Sneeze (blowing, sneezing, wheezing, and coughing sounds) that appears to be made for the purpose of clearing the nasal passages. A Snort sounds sharper and more purposeful than a Blow and may also be distinguished by context.

According to the Cambridge English Dictionary a Snort is an explosive sound made by forcing air up or down the nose; to suddenly express strong feelings of anger, disapproval, or disagreement. The Merriam-Webster Dictionary adds that a snort is used to express scorn, anger, indignation, derision, incredulity or surprise.

Young adult male, gm0032, is studying our vehicle. One of the cameramen moves in the car and gives him a fright. He Jolts and gives a Snort. (Gorongosa, Mozambique)

An infant seems to get frightened by something and emits a Snort and returns to the safety of his mother’s legs. Later he comes out and explores tentitively. (Masai Mara, Kenya)

An infant is following along after a four year old allomother. She seems to walk into some thorns, or something else, and gets a fright and gives a mini Snort. (Masai Mara, Kenya)

Little E is 3 days old. Allomother Lorato follows after Mama Little E and Little E. She is concerned about the car and exhibits Tail-Raising, Chin-Up and then Head-Shaking associated with a Snort. (Masai Mara, Kenya)

Latino walks toward car and must see someone out of it as she Head-Shakes and Snorts. (Masai Mara, Kenya)

A group of elephants is feeding around a lugga when all are surprised by a warthog running past. A pulsating rumble is made by the tuskless female while running. A calf is in the lugga and several females are running to rescue it. There is a lot of rumbling and listening.

An adolescent male Redirects-Aggression and turns and Charge at the vehicle while Foot-Scuffing and giving a Snort (attempt at Trumpet-Blast) for added effect. Then he displays Standing-Tall and Ear-Spreading. Notice that when he Charges he touches himself on his face (Touch-Self) as if slightly Apprehensive. (Masai Mara, Kenya)

A family group of elephants led by matriarch, Gina, is at a salt lick. There is some competition for the best spots and Gina has just Advanced-Toward a young male who Retreats-From. In this clip Gina has moved some distance away and the young male has returned to the salt lick and is standing eating minerals in the left foreground with a young female out of view next to him.

Another young female walks up behind him coming from the right. The female standing next to him turns to acknowledge/greet her with a Head-Shake and a Snort before walking away. The approaching female reaches out to the male touching his genitals (Trunk-to-Genitals). The young male appears to think he may be threatened and he Retreats-From. When he turns to see who it was and realizes it was not Gina, he Advances-Toward her and she Retreats-From. He goes back to eating minerals.

It is not completely clear whether the Head-Shaking was in greeting or in annoyance that the approaching female disturbed her accessing of minerals, but the posture of both female appears friendly. We read it as a supplant. (Masai Mara, Kenya)

There has just been a big drama in this group with one family trying to kidnap a newborn from another. The elephants are all worked up. Some adolescents come over to our car engaging with us with a few Head-Dip and Head-Dip-Touch-Ground playful threats. One reverses with a Snort and a half Head-Shake. (Amboseli, Kenya) 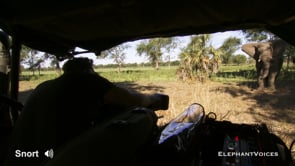 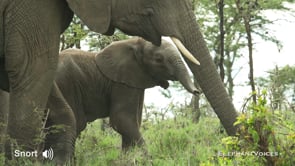 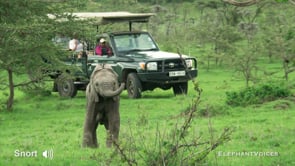 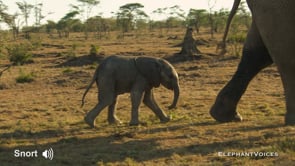 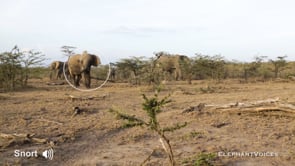 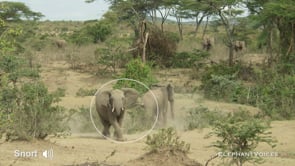 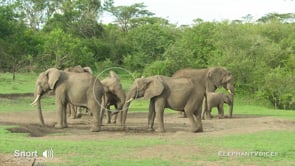 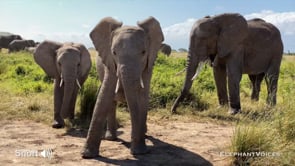