Placing the tip of the trunk over or on a dung pile and sniffing it; presumably for the purpose of assessing physical or sexual condition or individual identity. All age/sex groups Sniff-Dung, although males engage in this behavior more frequently than do females.

An 18 month old male calf approaches a pile of dung and begins to Sniff-Dung and the ground around it - Sniff-Ground - which likely includes urine soaked soil. The male has an Erection. He is very alert and displays Eye-Blinking and Ears-Stiff. He moves through the pile continuing to sniff and then becomes aware of the vocalizations of other elephants. He raises his trunk in a Periscope-Trunk posture and appears to sniff the air. Then he Touches-Self and goes back to Sniff-Dung. He and we become aware of another elephant approaching. It appears to be his mother who also Sniff-Dung as she walks toward to viewer. The calf turns and walks with her. (Maasai Mara, Kenya)

A musth male is sniffing as he walks. He pauses when he reaches a pile of dung to Sniff-Dung and the ground around it which likely contains urine soaked soil. (Maasai Mara, Kenya)

A young male is walking and slows his stride to Sniff-Dung. (Maasai Mara, Kenya)

These two males have been engaged in an Escalated-Contest for close to three hours. The male on the left with the broken tusks has had assistance from an older male who intervened on his behalf at least 5 times. He has engaged in very aggressive behavior toward the longer tusked male. Now near the end of the interaction the helping male has departed and the male on the right, who is just larger, is able to assert his dominance.

Minutes before this clip, the broken tusked male Urinated and Defecated at this spot and the longer tusked male has come over to test it. He Sniffs-Urine and Sniffs-Dung and then engages in Trunk-Flick-Down and Flehmen. It is possible that the broken tusked male is coming into musth for the first time, which could explain his persistent aggression - either way the other male is likely testing his sexual state or body condition. (Amboseli, Kenya) 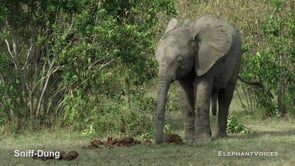 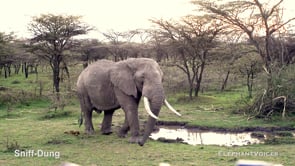 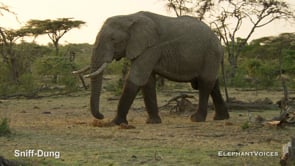 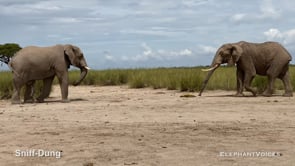