Moving at a fast amble, or ‘run’ after another elephant. Elephants may Run-After one another in Aggressive, Social Play and Courtship contexts. The appearance of head, ears and tails differ in the different contexts. In an Aggressive context all age/sex groups except infants may be observed to Run-After; in a Social Play context all age/sex groups, though typically younger individuals and more often male may be observed to Run-After; in a Courtship context an adult male may Run-After an estrous female.

Ozora is in estrus Guarded by Liaqat. There are numerous other males associated with them. As the clip begins Liaqat Guards Ozora following her. He stops to Contemplate something; she takes 4 more steps and then realizing he has stopped, she stops and Waits. The other males stop when she stops. She Waits for him with a J-Trunk and Looks-Back.

A male in the foreground approaches her and Liaqat begins to walk, but then stops again. Ozora Looks-Back and begins to Walk and then Waits for Liaqat again. The approaching male gets an Erection as he reaches Trunk-to-Genitals to test her and Ozora Orients-Away. Liaqat is coming and the testing male has little time. He Redirects-Aggression and, with a Full-Penis-Erection, he Runs-After another male his size, who is ahead of Ozora, reaching out to touch him with his trunk. With Liaqat Walking-Towards her Ozora has begun Walking again and we hear Liaqat give an Ear-Wave and a Musth-Rumble. Ozora keeps Walking and Looks-Back to see whether Liaqat is coming. She and he work together to maintain a distance between them of 6-10 meters. (Amboseli, Kenya)

Emo in musth (on the left) and Teejay not in musth (right) Advance-Toward one another. When they are about 25 meters apart Teejay stops Head-High but with a slight Chin-Out posture. Teejay one more step toward Emo and stops again, Foot-Lifting as Emo closes the gap to about 10 meters. Then Teejay turns and Runs-Away and Emo Runs-After him.

As they begin to run we see clouds of dust rising from their backs. We hear the sound of them running and their ears flapping and we can hear Teejay give a V8-Rumble. On the spectrogram we find a big increase in sound between 4 and 20 Hz. Elephants at some distance away would be able to pick up this acoustic signal between 8-20 Hz as well as its matching seismic signal. (Amboseli, Kenya)

An aggregation of about 100 elephants is playing and interacting in and around a deep pool. Everyone is over excited as families meet and compete and socialize. Noyeau (circled) has a new infant (circled) and has been standing by the edge hesitant to take it into the water. Chaos ensues around her as a female from an arriving family Advances-Toward her and she Retreats-From.

A female on the left (Broken Tusk) from yet another family decides to Run-After the arriving females. The female chasing Noyeau returns to help her family and Noyeau's infant ends up following her! Noyeau comes back to rescue her infant who is caught up in a Coalition of females who are Running-After the Broken Tusk female. Noyeau is chased and Tusked by one of the females, but she Waits for her infant who is on the ground and is having trouble getting up. Adult females are running in all directions Trumpeting. Noyeau retrieves her infant and departs. (Amboseli, Kenya)

Several families are competing over access to a mud-wallow. A one-tusked female on the left rushes at a female on the right Ear-Folding and Ear-Slapping. There is Trumpeting in response to the aggression, but it is not clear by whom. In the background an adult female Tusks a juvenile who Roars. The one-tusked female continues Ear-Folding and comes around the end of the mud-wallow and Runs-After the female Ear-Folding and Ear-Slapping who Runs-Away. A female bystander Head-Shakes in annoyance and there is deep Rumbling.

Once we are able to catch up with them she is following at a Walk with an Open-Mouth still Ear-Folding and Ear-Slapping. The fleeing female Defecates. (Amboseli, Kenya) 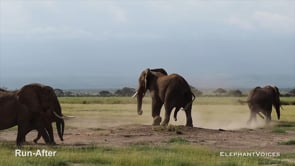 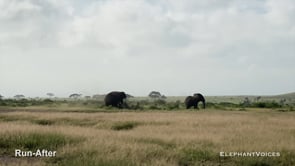 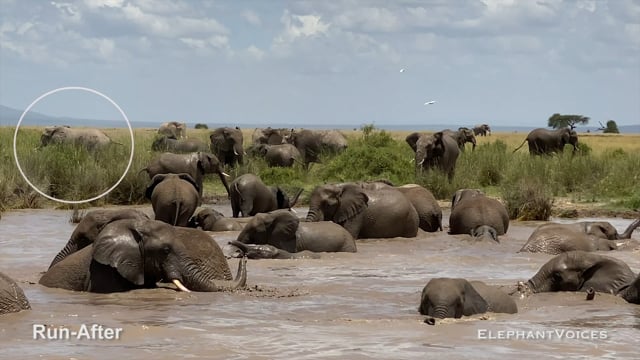 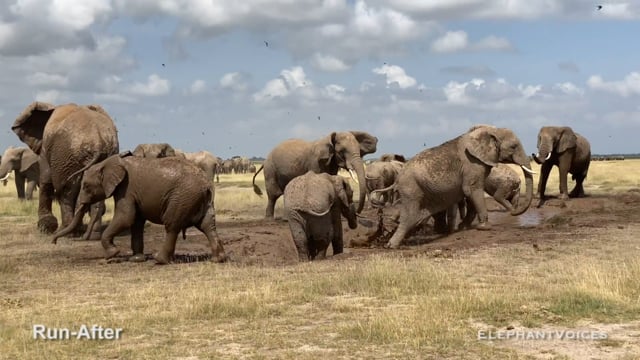