Moving at a fast amble, or ‘run’ after another elephant. Elephants may Run-After one another in Aggressive, Social Play and Courtship contexts. The appearance of head, ears and tails differ in the different contexts. In an Aggressive context all age/sex groups except infants may be observed to Run-After; in a Social Play context all age/sex groups, though typically younger individuals and more often male may be observed to Run-After; in a Courtship context an adult male may Run-After an estrous female.

A 1 year old male with a semi-erection Run-Afters and tries to Mount an 18 month old female calf who runs away. The male pursues her and Reach-Over her back and then Pushes her. (Maasai Mara, Kenya)

Two adolescent males are at play, one Runs-After the other who Runs-Away. The pursuer Grasps-Tail of the fleeing male and Tusks him as they run. The fleeing male Tail-Swats him. (Gorongosa, Mozambique)

Two adolescent males are playing. The one behind is Pushing and Tusking the one in front. The male in front Kicks-Back at the one behind. The male in front Runs-Away while the male behind Run-After. Catching him the pursuer Tusks him several times and forces him down, whereupon he pins him down by Stepping-On his leg. He Reach-Over as if to mount the trapped male, but he manages to get up and away. The game begins again. (Gorongosa, Mozambique)

A group of males is Sparring and engaged in social play of various sorts. One medium sized male Runs-After a younger male who Runs-Away. This Run-After is clearly intended to end in a Mount as the Chasing male has a Penis-Erection and is Reaching-Over the younger male with his trunk. As the males disappear out of frame we hear the younger male give a short Roar. The older male is unsuccessful, however, as another male, older still, intervenes, Advancing-Toward him and Ear-Folding and he abandons his Chase. (Amboseli, Kenya) 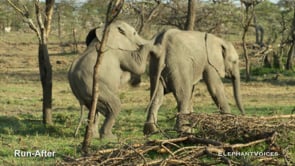 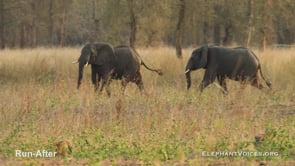 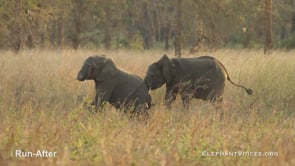 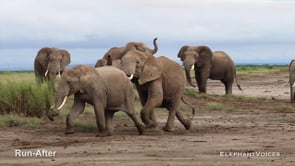