Swinging of the trunk and body during intense social arousal to touch nearest neighbor relatives during Bonding, Coalition and Bunching behavior. Sometimes the reaching and touching may include Grasp-Trunk. The elephant(s) usually secrete Temporin and rumble softly to one another, while Head-Raising, Ear-Lifting and Rapid-Ear-Flapping. Engaged in primarily by adult and adolescent females.

This behavior occurs in the following context(s): Affiliative, Coalition Building

A sub-section of the C family stands confronting us. Nomada appears to be trying to decide what to do. She stands Head-Swinging and then Reach-Touch to Corajosa before Head-Swinging again and departing and crossing the track behind us. Nomada crosses first but is rather unsure - she stands looking at us, Chin-Up and Ears-Spread. She Backs-Toward the others who are still on the other side of the track. She Reach-Touch Corajosa, as if to get her attention and, we believe, her assistance.

Corajosa Rapid-Ear-Flaps and Rumbles. Nomada turns to cross the track again with calves in tow and turns to face us with Ears-Spread. Corajosa then comes from the bushes on the left, and Sashays across the road. We hear more deep Rumbling. She Kicks-Dust and Charges with her Head-Low. She gives a Trumpet-Blast and does a Trunk-Bounce with her chopped trunk at then end of her Charge. Someone else also Trumpets and we hear more Rumbling as they disappear into the forest on the other side of the road.This is just before they cross the road and Corajosa Charges us. (Gorongosa, Mozambique)

An adult female and two tuskless calves, one about four and the other about 6 are feeding on grass. As we drive up we are unaware that another four year old - the son of the female on the left is separated from the family about 50 meters away and it is probably concern about him that stimulates their response. They react to us in a dramatic fashion, initiated by the larger tuskless juvenile female who Rumble-Roars twice.

The other tuskless calf seems to Rumble-Roar, too. The mother on the left Head-Shakes and Trumpets and the other adult female comes running over to help, also Trumpeting. These are what we would call Social-Trumpets. They Bunch and the two mothers Stand-Tall, Rumbling and Reach-Touch one another and continue to Rumble. The female on the right Trumpets again. The older tuskless reaches Trunk-to-Mouth to the littler one. They Listen. The mother on the right reaches Trunk-to-Mouth to her tuskless calf. The older tuskless touches the younger again, too. They begin feeding again, but continue Rumbling.

A couple of minutes later: We move the car and the female who is missing her male calf Rumbles and then Listens as we stop. Her male calf suddenly comes into frame - we have been hearing him give Separated-Rumbles. He walks to his mother and begins Suckling and then they all move off. The initial behavior and vocalizations are what we call the catch-all term ''Bonding-Ceremony''. (Amboseli, Kenya) 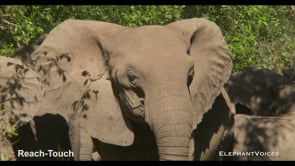 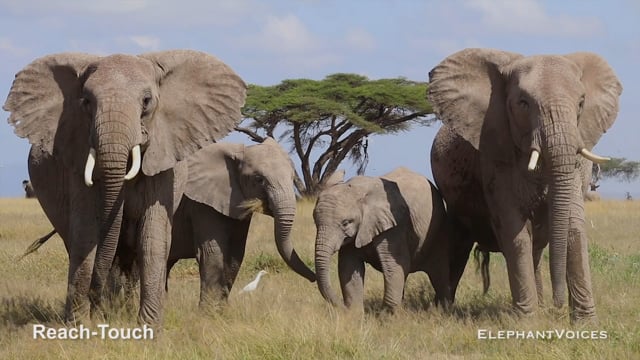