Pushing the head or base of trunk into the back, side, head or trunk of another to move it away or along or to assist it. Pushing comes in different forms and may be rough in aggressive contexts or very gentle in a situation where an elephant is attempting to help, herd or shepherd a family member.

All age/sex groups may be observed to Push in an Aggressive context; while adult, adolescent and juvenile females may Push in a Calf Reassurance & Protection context; and adult females in a Movement Space & Leadership context. Social Play context Pushing is most likely to involve males of all ages.

One young male Pushes another after a bout of sparring. (Maasai Mara, Kenya)

A four year old female is browsing when a less than 2 year old male calf comes up behind her and playfully Pushes her. (Maasai Mara, Kenya)

Two one year old male calves are at play, one following the other and Pushing him along. The male behind Grasp-Leg of the male ahead, who turns around to Push the male behind. Then roles are reversed again as the pushee becomes the pusher. (Maasai Mara, Kenya)

Little E is 4 days old and he is suddenly fascinated with his mother's trunk and begins Pushing it. He tries again but she uses it to touch his genitals instead (Trunk-to-Genitals). He tries Pushing her trunk again and then she holds his tail and he Shelters under her. (Maasai Mara, Kenya)

Three adolescent males are having a playful brawl. One male uses the side of his body to Push another and then turns to Push or Tusk him away. (Gorongosa, Mozambique)

Families of elephants are leaving a pool where they have been Swimming and playing for a long while. As they reach the bank they continue to engage in social play. Some Clamber out to follow their mothers. Two juvenile females, one tuskless, are Clambering up the bank and the tuskless female Pushes the tuskless back into the water. The tuskless finds another location to Clamber out, while the tuskless female takes her place on the bank. (Amboseli, Kenya) 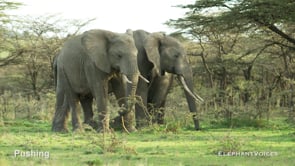 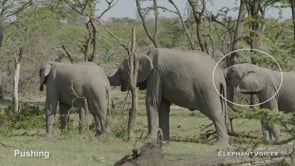 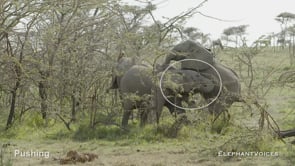 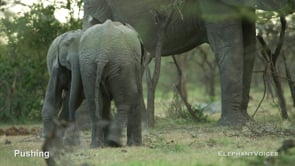 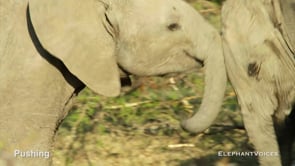 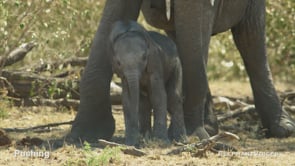 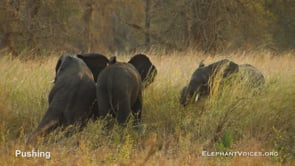 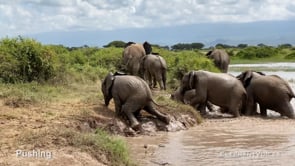 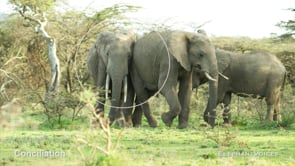