Pushing the head or base of trunk into the back, side, head or trunk of another to move it away or along or to assist it. Pushing comes in different forms and may be rough in aggressive contexts or very gentle in a situation where an elephant is attempting to help, herd or shepherd a family member.

All age/sex groups may be observed to Push in an Aggressive context; while adult, adolescent and juvenile females may Push in a Calf Reassurance & Protection context; and adult females in a Movement Space & Leadership context. Social Play context Pushing is most likely to involve males of all ages.

Pascal (circled) is Guarding Nastya (circled) when a young male comes up behind Nastya and Pushes her in an attempt to drive her away from Pascal. It was a nice try but it didn't work. (Amboseli, Kenya) 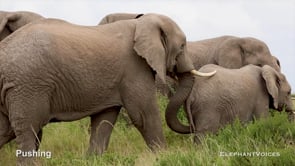