Attempting to assist an infant to get to its feet, up a bank, out of a well, or similar predicament; or to assist a helpless, injured, dying elephant by using the trunk and/or feet to pull towards it; using the trunk to pull an object toward it. Pulling a dead elephant or its bones is referred to Pull-Carcass.

Little E is 15 days old. He Scrapes-Ground with his forefeet. He seems to want to lie down. He eventually does so, but ends up rolling down hill into a ditch ending up on his back. His mother immediately uses her trunk to Pull him up him to his feet and then touches his Trunk-to-Genitals. Lorato is hovering around to help and also touches him. This is after his mother slipped on the rocks and landed on him. "What a dangerous place!". (Maasai Mara, Kenya)

One of Angelina's twins has been with 3 allomothers. A musth male has been touching it and the allomothers were concerned. It is very windy so it is hard to say whether they communicated with Angelina - but she comes over to retrieve the infant, Pulling him toward her. (Amboseli, Kenya)

An adult male is hanging around testing females and Angelina is concerned for her twins. She Spars or Pushes against him and then using her trunk she Pulls one of her twins toward her and out of any potential harms way. (Amboseli, Kenya)

Qoral has a newborn male who is lagging behind discovering the nature of soil. An allomother who is Qaskasi, Qasima's 10 year old daughter, tries to Shepherd him along, but Qoral doesn't like her intervention and comes back to see her off and retrieve him. She Pulls him gently along with her trunk and gives a Coo-Rumble to him. Once he is moving in the correct direction she turns and walks on. The infant pauses again and his older brother, Qenkey, Pushes him gently forward. They depart. (Amboseli, Kenya)

A family group has crossed a small river and are Clambering up the other side. Two adult females are already out of the water. One mother turns to Help her calf, but it doesn't seem ready to come out. Then it tries and she attempts to Pull it, but the calf goes back into the water. It tries again, but the mother is feeding. The calf then follows others to try climbing out at another spot. When that doesn't work it comes back with another calf.

Two juvenile females are in the water with the two small calves and they seem to make a halfhearted attempt to Push them out, but their mothers are now both Waiting for them on the bank. As the calves attempt to climb up the bank the mothers reach their Trunks-Toward and around behind them and Pull them up the bank. In addition to Pulling the mothers trunk acts as a stabilizer, preventing the calves from slipping back into the water. (Maasai Mara, Kenya) 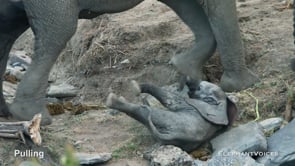 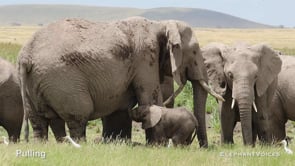 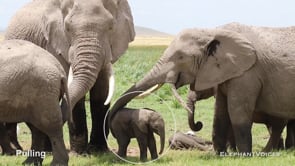 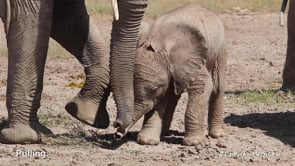 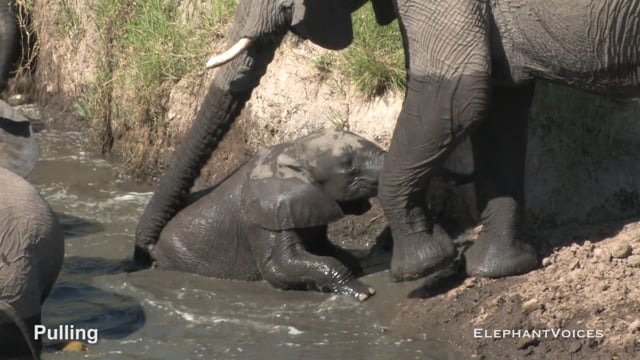