Provocadora, gf0012, stands Contemplating us with a J-Trunk. Her calf adopts a Periscope-Trunk as she tries to Solicit-Suckling, but Provocadora has other things on her mind and begins a Purposeful-Walk Advance-Toward us as she initiates a Group-Advance. (Maasai Mara, Kenya) 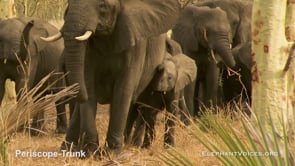