A four year old female (right) and a two year old male are considering playing together. They stand facing one another and the female on the right adopts a Periscope-Trunk in an expectant posture. It is reciprocated and they Spar. They are interrupted by a six year old female who roughly Pushes the younger calf away. But he returns and adopts a Periscope-Trunk again and they resume their playing. (Maasai Mara, Kenya)

A four year old female (right) and a two year old male are considering continuing their play together. They stand on opposite sides of a tree. The female Pushes on it and then the male begins Pushing. He then goes around and reaches Trunk-to-Face. He Backs-Away and seems to swing his head - considering. The female raises her trunk in a Periscope-Trunk against the tree and the adopts a Periscope-Trunk and examines her tusks tip (Allo-Check-Tusk). He waits in this expectant position and then comes around and they stand Reciprocal-Open-Mouth before walking off together. (Maasai Mara, Kenya) 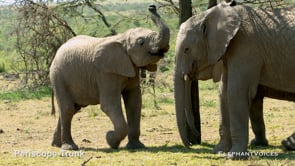 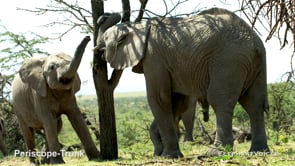