A flaccid elephant penis is normally sheathed between the hind legs. As the penis starts to engorge it may partially extrude, still flaccid. A semi-erect penis is almost fully engorged and extrudes forward from the sheath and downward toward the ground. During a full-erection the tip of the penis twitches for several seconds, curving upward toward the belly, forming an S-shape. The term Penis-Erection refers to both semi- and full-erections.

When a non-musth male elephant urinates he fully extends his penis and usually, thereafter, obtains a semi-erection, which may lead to a full-erection. Males in musth typically Urinate with the penis still sheathed. Male infants and calves usually obtain erections when they Suckle, and both young and adult males sometimes obtain semi- and full-erections when they are engaged in Sparring activities, especially when these include Mounting.

Three calves all under 2 years old are at play. A male (back left) reaches his trunk over [Reach-Over] the calf closest to the camera, but this male moves away and the male, with a full Penis-Erection Mounts the other calf instead.

As the calf in the foreground contemplates the situation he Head-Waggles. The Mounted female walks away and the Mounting male walks with her until he fall off. Meanwhile the male in the foreground Orients-Toward the first male and Mounts him. Notice the fresh Temporin on two of the calves. (Maasai Mara, Kenya) 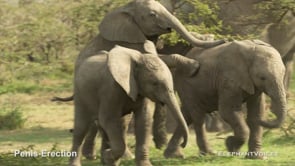