Opening the mouth while touching it to another elephant’s mouth who is also displaying Open-Mouth. This behavior may be displayed by adult females during Greetings and Coalition Building, during High-Fiving, and by all age/sex classes during bouts of Sparring.

After Valente's almost two minute Charge which was joined by the entire family, Valente and Mwana Nzo High-Five and others all gather in an End-Zone-Dance. The main players, Valente and Mwana-Nzo Rumble with Open-Mouths, while they display Rapid-Ear-Flapping, Head-Raising, Tail-Raising, and Defecating, while others join in. They reach their trunks to one another's mouth, Trunk-to-Mouth, and then display Trunk-Twining, Open-Mouth-to-Open-Mouth. Intermittently there are Social-Trumpets by other members of the family. Then Mwana Nzo initiates another Group-Advance. (Gorongosa, Mozambique) 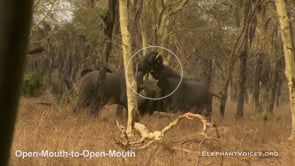