Opening the mouth. Covered by the trunk the mouths of elephants are not very obvious sources of visual displays, but during excited vocal interactions elephants open their mouths wide, often holding their trunks curved upward, exposing the mouth. During many social interactions elephants become highly aroused, opening their mouths to Rumble, Roar or scream at very high sound pressure levels. Typically, Open-Mouth indicates vocalization, but Open-Mouth is also observed during Sparring when elephants raise their trunks over the heads. Open-Mouth may also be observed during aggressive interactions, when an elephant, often an adult female, may hold her mouth open as she aggressively follows another. It is possible that she is producing a very low frequency vocalization, but often the mouth is held open for a longer time than would be typical of a Rumble.

All age/sex groups may be observed displaying Open-Mouth, but it is much more common among female elephants than among males. Males might be observed exhibiting Open-Mouth when Roaring in protest in a Submissive context, while females show Open-Mouth in Affiliative, Aggressive, Movement Space & Leadership, Coalition Building, Birth, Advertisement & Attraction and Submission contexts. Infants and calves will exhibit Open-Mouth in a Calf Protection and Reassurance context.

Corajosa has been engaging in Perpendicular-Walk moving her trunk in a sweeping movement (Trunk-Sweep) as she seems to direct the others to action. As the clip begins she and others coalesce and she reaches her trunk up with Open-Mouth to the other leading adult female - the exhibit Head-Raising, Ear-Folding, Rapid-Ear-Flapping, Reciprocal-Trunk-to-Mouth, Open-Mouth-to-Open-Mouth and Trunk-Twining as they High-Five.

Their vocalizations in the distance are covered by our own voices and the audio is not included. Then they begin a Group-Advance toward us. (Gorongosa, Mozambique)

After Valente's almost two minute Charge which was joined by the entire family, Valente and Mwana Nzo High-Five and others all gather in an End-Zone-Dance. The main players, Valente and Mwana-Nzo Rumble with Open-Mouths, while they display Rapid-Ear-Flapping, Head-Raising, Tail-Raising, and Defecating, while others join in. They reach their trunks to one another's mouth, Trunk-to-Mouth, and then display Trunk-Twining, Open-Mouth-to-Open-Mouth. Intermittently there are Social-Trumpets by other members of the family. Then Mwana Nzo initiates another Group-Advance. We only marked Open-Mouth in the first part of the clip. (Gorongosa, Mozambique) 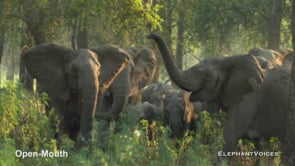 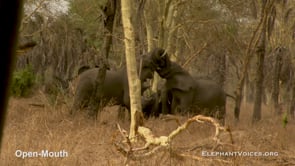