An elephant (typically male) succeeding in placing his forelegs on the back of another elephant. Mounting occurs in Courtship and Playful contexts. Mounting of an estrous female may be successful (intromission and ejaculation occur) or unsuccessful. A successful Mounting is termed a Mating and largely depends on the female Standing-to-Mate rather than moving forward.

Mounting during Social Play is commonly observed. Among infants and calves males may Mount other female or male infants or calves. Often calves lie down in a heap while others (males) Climb-Upon them in behavior akin to Mounting. Among juveniles, adolescents and young adults, males typically Mount other males. The penis is sometimes rubbed rapidly, using its own muscle-power, up and down between the other male's back legs. Ejaculation sometimes occurs. Adolescent females have been observed attempting to Mount the calves they are allomothering. In addition, elephants are observed to Mount dead elephants, possibly in an attempt to rouse them (see Mount-Body). Mounting in all except the allomothering context appears to be a male activity and the Mounting individual typically has an erection.

Little E is 14 days old. Lorato tries to Shepherd Little E off the termite mound using trunk and feet and seems to want him under her - or something? She touches him Trunk-to-Genitals, and Trunk-to Body and Grasps-Leg (his). Her movements seem to suggest that she might be trying to Mount him (seen before by adolescent females) or is she trying to Shelter him? (Maasai Mara, Kenya) 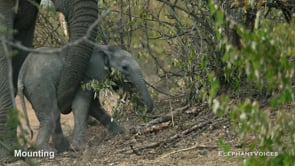