Standing or walking away while looking back over the shoulder. As an elephant Looks-Back it may flatten an ear against its body and turn its head in order to see what is behind it. This behavior is observed in numerous contexts.

In Aggressive contexts by dominant individual Look-Back is a threat (as in ‘Watch it - I can see you!’). In a Submissive context a subordinate individual typically Looks-Back when retreating from an aggressive elephant.

In Vigilance and Avoidance contexts, similarly, by high ranking elephant engaged in Rear-Guard (‘Watch out, I have my eye on you!’) or by retreating fearful elephants to monitor the location of a perceived threat. In a Calf Protection and Reassurance context during the Shepherding and Guiding of infants, mothers and allomothers Look-Back to see whether an infant is following or needs care or assistance. In a Courtship context an estrus female will Look-Back to monitor the presence, proximity and activity of pursuing or Guarding males. In a Space Movement and Leadership context individuals Look-Back when Waiting for or Guiding others, to see whether they are following. For example, Look-Back may be observed during the Let’s-Go-Stance.

As a family group walks past the car members of the family are attentive to what the filmmakers are doing. We see them Look-Back and also reach their Trunks-Toward the car. (Maasai Mara, Kenya) 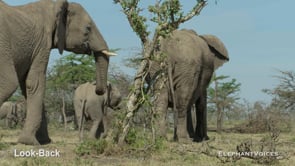