Kicking back with the hind legs to push another individual or object away. This action may be seen in a number of contexts. For example: A mother to a begging calf she is trying to wean or to one who is repeatedly Soliciting-Food; an elephant kicking back at an object behind it that it is playing with; an estrus female trying to dislodge a Mounted male; an elephant trying to force away an elephant he or she feel is too close behind.

During play this action may be repeated for long periods as the elephant plays with an object of interest. Very often these are man-made objects (e.g. paper bag, flip-canister, flip-flop, tin can, piece of cloth) that an elephant finds in his environment, but a log or stick may make any equally good, though perhaps not so engaging ‘toy’. Youngsters may Queue-Up for a chance to play with such an object. Kick-Back occurs in all age/sex groups except in the context of Calf Nourishment and Weaning when it is only exhibited by adult females.

A 4 year old calf hurries toward a young male who has a large branch and tries to Steal-Food. Note that this is the 3rd calf who has come rapidly this way. The male turns away dragging the branch with him and the calf attempts to Steal-Food again. The male takes a few more steps and the calf gives up, finding that the male has left some of the branchlets behind the calf goes behind the male. The male uses his tail and hind foot to Kick-Back and Tail-Swat at the calf. (Gorongosa, Mozambique)

Little E is 3 days old. He goes exploring and meets an uncle, a 7 year old family male. The little male reaches his Trunk-Toward Little E and then walks away. Little E follows and the boy tries using his foot to Kick-Back (x2). On the second Kick-Back Little E almost falls over and emits a little squeak - Husky-Cry although can't hear well due to wind. He looks confused and stands for a moment as the boy Kicks-Back at the air. Little E doesn't get the message and follows him again.

Little E begins sniffing the boy's back end which alarms the boy and he Kicks-Back a 4th time. Luckily Mama Little E and Lorato come to the rescue, both reaching to touch Little E Trunk-to-Genitals. Little E persists, however, exploring between the boys back legs with his trunk, where upon the boy Kicks-Back again, almost knocking Little E over. Lorato put her trunk around him (Trunk-to-Body) and then walks between Little E and the boy in what appears to be an act of Allomother-Intervention. (Maasai Mara, Kenya)

Little E is 6 days old. Latino is feeding next to Mama Little E and Little E wanders over and begins sniffing around her back end. She Kicks-Back almost knocking him over. Immediately, as this is happening, Latino's son, an 18 month old comes in with his ears forward in an aggressive posture Pushing Little E. He clearly didn't want him near his mother.

A fool for punishment, Little E tries again and the 18 month old Pushes him again. Then he reaches out Trunk-to-Genitals in a possible act of Conciliation We can't tell if there are any vocalizations due to the wind. (Maasai Mara, Kenya)

Grumpy Grandma, f0412, and family are with another family browsing. Lorato is moving in on a female of her same age who Kicks-Back to try to keep Lorato away. Lorato pushes through and the female Orients-Away and uses Tail-Swatting to monitor where Lorato is. Lorato continues and then goes to test the genitals (Trunk-to-Genitals) of f0311 who also Kicks-Back and Tail-Swats at Lorato. (Maasai Mara, Kenya)

Angelina is with her infant twins and some allomothers and is waiting at the swamp edge to swim back over to the west side. A medium sized male is with them and one of the twins is trying to Suckle from him - searching around his back legs with its trunk. The male Kicks-Back at it, but the infant tries again. He Kicks-Back again as Angelina uses her trunk to draw the infant toward her and away from trouble. (Amboseli, Kenya)

Angelina has just walked off with the female twin and the male is with Abra's 2 year old calf who seems to be looking after him. When he runs toward Abra she Kick-Back at him. This behavior is typical of non-mother lactating females. While Abra is very attentive to the twins, helping significantly, they must learn to Suckle from the correct mother. (Amboseli, Kenya)

Qoral has a newborn infant and Qasima's 10 year old daughter Qaskasi wants to be close to it all the time. Qoral is not very happy about this and keeps trying to keep her away. In this clip Qaskasi Backs-Toward Qoral and gives her a couple of Body-Nudges with her rump. Qoral backs up as if to block her, though this is very subtle. The Qoral very clearly Body-Nudges her away. Qaskasi begins to Tail-Swat her and Qoral Tail-Swats her back. Kaskazi Tail-Swats her again and then Kicks-Back at her. Qoral responds with an exaggerated Kick-Back. Qaskasi moves a little away and Waits. She begins to Tail-Swat again. And then Backs-Toward Qoral again still Tail-Swatting. (Amboseli, Kenya) 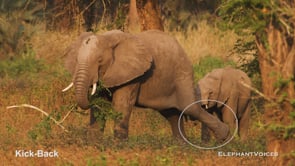 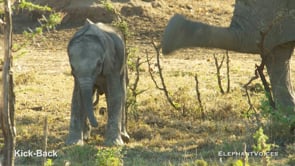 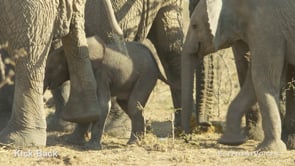 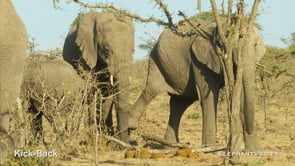 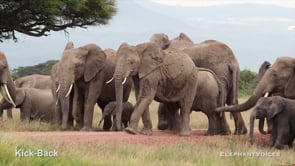 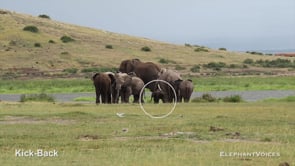 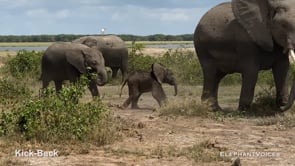 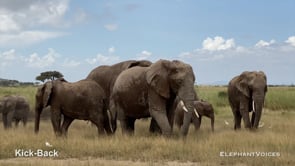