A sharp and sudden swinging or tossing of the head and tusks down, up and sideways, to threaten or hit an elephant by its side who is either too close or doing something that displeases the elephant. Often seen in competition over resources such as an older calf Begging for food or attempting Food-Stealing from its mother, or other, or at a salt lick or small water hole. (Previously referred to Head-Swinging a term now used for a different behavior.

Members of the C family are in view. A 6 year old female Head-Swipes at gf0080's 6 month old female infant. Note that this occurs immediately after adult female gf0003 moves forward and Supplants the younger elephants. Her approach was likely why the 6 year old swung her head at the 6 month old. (Gorongosa, Mozambique)

A gaggle of playing elephant calves are walking alongside an older adolescent female. She appears to become fed-up with the calves mucking about and twice swings her head sideways in a Head-Swipe to push the closest calf away. (Maasai Mara, Kenya)

Members of Grumpy Grandma's family are resting in the shade of a tree, including Mama Little E, and allomothers Lorato and V-Notch. Mama Little E (left) appears to become annoyed when V-Notch starts to Tail-Swat. She Head-Swipes at V-Notch, literally shoving her over a couple of steps. V-Notch takes a couple of steps forward before beginning to Back-Toward Mama Little E again, perhaps trying to get just a bit more shade. Mama Little E is likely protecting her calf who is only a couple of days old. (Maasai Mara, Kenya)

Evening and calves are playing. On the left frame Little E's allomother, Lorato, walks up alongside V-Notch, his other allomother, who is feeding on a stick. V-Notch aggressively Tusks Lorato with a Head-Swipe and Lorato moves away. But notice that this Head-Swiping motion is also associated with/followed by V-Notch clasping her trunk around Lorato's chest, in what may be a Conciliatory gesture. (Maasai Mara, Kenya)

Angelina has just been through a terrible ordeal with her twins when one of them was kicked and tusked at by an adult male when they were attempting to cross the swamp. Perhaps her nerves are a bit frayed. When juvenile female Allura tries to Back-Toward her to gain access to the twins, Angelina Head-Swipes at her Pushing her away. It looks, by her Ear-Flapping that Allura Rumbles though we cannot hear it due to the distance and the wind noise. (Amboseli, Kenya) 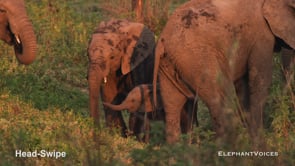 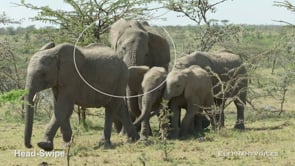 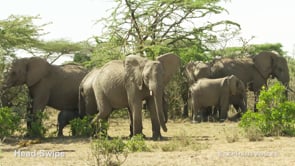 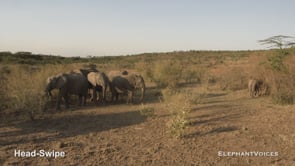 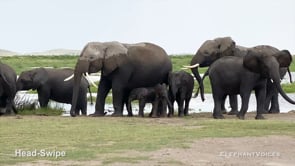