An abrupt shaking of the head, which causes the ears to flap sharply and dust to fly. Head-Shaking usually starts by the elephant twisting the head to one side and then rapidly rotating it from side to side. The ears slap against the side of the face or neck making a loud smacking sound.

Head-Shaking occurs in a broad range of contexts. It can be a sign of an individual's annoyance with or disapproval of an individual or circumstance. It can be used as a threat to other elephants or in confrontations with predators, as well as in play in feign annoyance. It also occurs during intense social events such as Greeting-Ceremonies or the arrival of an awaited individual.

Head-Shaking may also occur after a longish period of contemplation - as if the individual has considered something and the Head-Shake is an outward expression of those feelings. Head-Shaking also typically follows a bout of mud-splashing or mud wallowing.

This behavior is observed in all age/sex groups except during Affiliative bonding behavior in which it is limited to female adults, adolescents, juveniles and calves.

A family group of elephants led by matriarch, Gina, is at salt lick. There is some competition for the best spots and Gina has just Advanced-Toward a young male who Retreats-From. In this clip Gina has moved some distance away and the young male has returned to the salt lick and is standing eating minerals in the left foreground with a young female out of view next to him.

Another young female walks up behind him coming from the right and the female standing next to him turns to acknowledge/greet her with a Head-Shake before walking away. The approaching female reaches out to the male touching his genitals (Trunk-to-Genitals). The young male appears to think he may be threatened and he Retreats-From. When he turns to see who it was and realizes it was not Gina, he Advances-Toward her and she Retreats-From. He goes back to eating minerals. It is not completely clear whether the Head-Shaking was in greeting or in annoyance that the approaching female disturbed her accessing of minerals, but the posture of both female appears friendly. (Maasai Mara, Kenya)

(There is no audio due to terrible wind noise.) As the clip starts we see Lorato standing with Mama Little E and Little E. She is Head-Raising and Ear-Lifting as if she is in communication with someone. Then she Head-Shakes and turns to face the other way as if in anticipation.

The camera pans right and we see the matriarch, Grumpy Grandma, walking towards the little group. When she is about 5 meters away Lorato is seen Head-Shaking again. Grumpy Grandma pauses to eat something and Lorato and Mama Little E Back-Toward her, while still Ear-Lifting. (Maasai Mara, Kenya)

An adult female stands Waiting for a male who is approaching her. He arrives and reaches his Trunk-to-Genitals as if to sniff her, but instead appears to do a mix between a Social-Rub and a Push. The female Head-Shakes and dust flies. They both move on. It is hard to say exactly what went on between these two individuals though the interaction appears friendly. (Maasai Mara, Kenya) 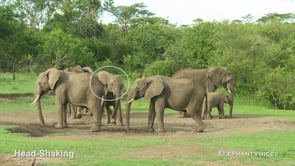 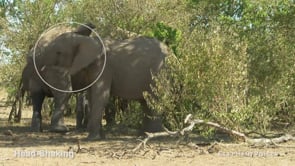 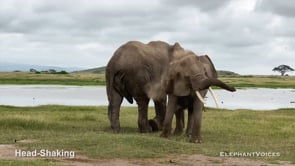