Using the trunk to grasp the trunk of another. This is most often observed when mothers and allomothers grasp the trunk of a newborn, apparently to get its attention back to the mother or allomother, for instance to induce it to Follow, or to Suckle, or to Help it. For example, we observed an allomother grasp and lift the trunk of an infant who was submerged and appeared to be drowning; a mother who grasped the trunk of an infant who was sneezing; as well as mothers who grasped the trunks and covered the mouths of calves Crying in distress. Mothers and allomothers are often observed to grasp the trunks of newborns apparently directing them to Suckle, using the behavior to lift the head of the infant toward the breast, or to Follow, doing the same together with a Trunk-Sweep motion and steps forward. One video shows a male moving an infant out of the way by grasping it by the trunk in an attempt to move it to the side. Grasp-Trunk has also been observed in an unusual situation in which an adolescent female repeatedly grasped the trunk of a younger brother to engage in Allo-Trunk-Sucking. Grasp-Trunk is also often observed in the context of Social Play. Grasp-Trunk may also be observed when elephants are highly aroused and gathered together in a Bonding-Ceremony, when Reach-Touch may become a brief Grasp-Trunk.

Two calves are at play. The older calf turns away and Kicks-Back at the younger calf. Then Orients-Toward the younger calf again and they Push one another and the older calf Grasp-Trunk x 2. In the next scene they become rougher and the 5 year old female on the left intervenes to break it up (Allomother-Intervention). (Amboseli, Kenya) 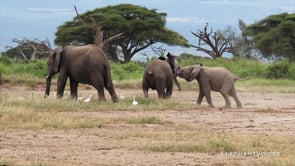