Provocadora, gf0012, of the Mabenzi family initiated this Group-Advance. They come to within about 20 meters of us and then stand Bunching and Head-Swinging. Marcela, gf0017, begins Foot-Swinging as they Contemplate what to do. (Gorongosa, Mozambique)

The shot starts with Isabella, gf0038, of the I family leading a Group-Advance toward us with rest of her family coming behind. She Reaches-High as she makes a Perpendicular-Walk not directly toward us. She stops her forward motion with a Foot-Swing and a Head-Shake and turns toward matriarch iJunia, gf0005, who has caught up, and reaches Trunk-to-Mouth to her as they Bunch together. Then together they begin a Group-Advance. (Gorongosa, Mozambique) 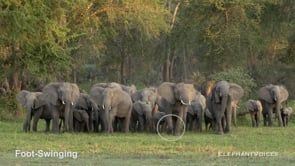 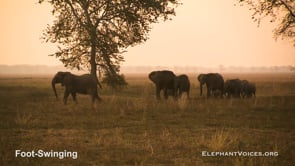