A teenage male stands Foot-Swinging and Ear-Stiffening in an attentive posture. This behavior took place in the midst of a series of aggressive encounters between other elephants - both males and females. The young male appears to feel Apprehensive about being caught up in the middle of the aggression. The camera pans left and we see a female standing behind him also Foot-Swinging. (Maasai Mara, Kenya)

Pascal is Guarding Qadija who is in peak estrus and just walking past him where there are other males. He needs to keep a close eye on her. Yet there is a male behind him that is annoying him. He pauses, Looking-Back as if undecided what to do. He Foot-Swings, and then Ear-Waves, Musth-Rumbles as he spins around and Lunges toward the male and then quickly turns around again to follow Qadija. (Amboseli, Kenya) 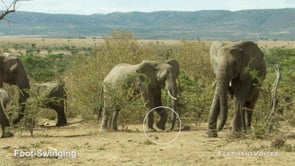 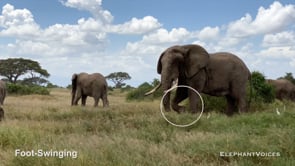