Raising and holding a foreleg off the ground. Raising and holding a hind-foot may also be observed although this is less common than a forefoot. Individuals in all age sex groups may Foot-Lift in Submissive, Ambivalent and Conflict & Confrontation contexts when unsure of what action to take, as in Displacement-Behavior. Likewise, all age sex groups may Foot-Lift In Attentive and Vigilance contexts as seen during Freezing behavior, when elephants may be feeling for or picking up seismic vibrations.

In a Movement Space and Leadership context Foot-Lifting is observed among adult females as a signal of intention - i.e. an Intention-Movement - for example, as a component of the Let’s-Go-Stance.

Emo in musth (on the left) and Teejay not in musth (right) Advance-Toward one another. When they are about 25 meters apart Teejay stops Heah-High but with a slight Chin-Out posture. Teejay one more step toward Emo and stops again, Foot-Lifting as Emo closes the gap to about 10 meters. Then Teejay turns and Runs-Away and Emo Runs-After him. As they begin to run we see clouds of dust rising from their backs. We hear the sound of them running and their ears flapping and we can hear Teejay give a V8-Rumble. On the spectrogram we find a big increase in sound between 4 and 20 Hz. Elephants at some distance away would be able to pick up this acoustic signal between 8-20 Hz as well as its matching seismic signal. (Amboseli, Kenya) 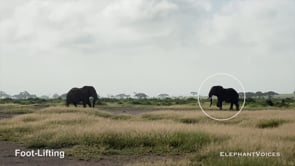