An individual sharing food with another or others. For example: a male (typically in musth) sharing a tree he has felled with others (usually females and calves); an individual purposefully dropping food, offering food, or putting food into the mouth of another individual who is begging vocally or gesturally (see Solicit-Food) or to one who is incapacitated (e.g. missing most of trunk due to snaring), sick, dying or dead (for the latter see Body-Feeding).

Nalakite is carrying and eating a branch. Her two sons aged 6 and 10 are walking beside her Soliciting-Food, the older male Social-Rubbing against her and reaching toward her mouth. She drops a bit of stick in an act of Food-Sharing. Neither male notices until later and they both reach into her mouth to Solicit-Food. She pulls away and Grumble-Rumbles at them in a complaining tone. She purposefully removes another bit of the stick and drops it on the ground, in another act of Food-Sharing. This time it is for the 10 year old, who Social-Rub against her, picks up the stick she has dropped and eats it.

Meanwhile, the 6 year male has realized that she had dropped a stick, but he can't reach it with her legs in the way (and it has already been taken by his brother). Nalakite continues to walk forward and he emits a Grumble-Rumble. The six year old still searches the ground blocking his mother's way and then, in his frustration, jabs her with his tusk - the Tusking causing her leg to buckle. She Redirects-Aggression swinging her trunk toward the 10 year old, who anticipating trouble emits a Grumble-Rumble.

Mum continues to walk and when the 6 year old is behind her she uses a back leg to Kick-Back. He Grumble-Rumbles and comes around behind her to the other side. (Maasai Mara, Kenya)

Tailess male calf and his mother are walking along together. The mother is feeding on a branch and drops a bit from her mother. Her tailless calf pauses to pick it up and eats it. It is likely that this was not an intentional act of Food-Sharing, though it is not possible to know.. (Maasai Mara, Kenya)

Matriarch f0116 is with her 3 year old calf. She is browsing and her calf is following what she is eating and searching in same area (Social-Learning). The calf reaches to her mouth to Solicit-Food. f0116 then extracts another trunkful and drops a piece for the calf - it would seem purposefully in an act of Food-Sharing. Then she touches the ground where it is x 2, as if showing calf where it is in a possible example of Pointing - Guiding her calf to the stick with her trunk. The calf picks it up and eats it and then uses same maneuver that her mother had used to browse (Social-Learning). (Maasai Mara, Kenya) 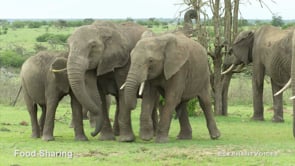 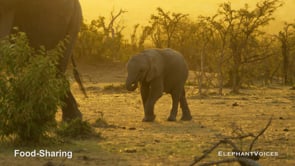 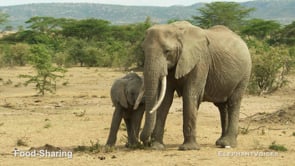