Purposeful, directed walking with hostile intent toward another elephant(s), or toward a perceived non-elephant threat, that typically results in sumissive or avoidance behavior or counter threat. The term includes an Advance-Toward of a single step to a persistent, prolonged and highly aggressive pursuit at a fast walk. The latter often follows an Escalated-Contest when one male has signalled defeat by fleeing.

G7 Advances-Toward gm0016. Other males Orient-Toward G7 apprehensively. G7 strides past straight toward gm0016 who first Orients-Toward him, then Backs-Away, turns and Retreats-From. They walk in a wide arc with gm0016 Tail-Swatting to keep track of G7's proximity. After this interaction they begin to Spar. (Gorongosa, Mozambique)

G7 joins the Mabenzi family. As he arrives he sees Gogogo in musth and he stops and Look-At Gogogo. As Gogogo Advance-Toward G7 he Backs-Away. (Gorongosa, Mozambique)

This young male has just had a confrontation with the same female in which he threatened and Supplanted her. He is briefly distracted by another elephant but then he Advances-Toward her again, while Ear-Folding, Ear-Flapping, and Trunk-Dragging. She Retreats-From and Orients-Away. (Maasai Mara, Kenya)

A group of elephants is mud-splashing at a water-hole. The group includes cows and calves and a young male (left). A musth male (right) can be seen to Advance-Toward the mud wallow. Some of the elephants at the mud-wallow stop what they are doing to monitor his approach. The young male can bee seen Listening. As the musth male arrives the young male Orient-Away and Retreat-From. Other elephants in the group also give way. (Maasai Mara, Kenya)

Two young males are Sparring. While Sparring is typically playful this bout becomes rough. The male on the right Orients-Away and Retreat-From the male on the left, who adopts a threatening posture with his ears held stiffly forward as he Advances-Toward the retreating male. (Maasai Mara, Kenya)

A female is seen to stand Ear-Spreading facing another elephant who is behind a bush. As the elephant, a young male, Advances-Toward the female she Orients-Away and Retreats-From. The young male emphasizes the seriousness of his threat by Ear-Folding and walking purposefully and noisily through a bush demonstrating a variant of Bush-Bashing. (Maasai Mara, Kenya)

Matriarch Gina (large adult female on the left) is with her family at a salt lick. A young non-family male is also present - beyond her. It is not obvious that he is being bothersome, but she stops digging for minerals, exhibits a Trunk-Flick-Down and then Advances-Toward him with a slight Ear-Slap. He gives a V-8 Rumble and Retreat-From her. (Maasai Mara, Kenya)

A musth male is in a mud-wallow surrounding by females and their calves. A young male has already moved out of his way and is waiting in the right foreground with ears lifted attentively, as he monitors the musth male's position and activity. As the musth male steps out of mud-wallow and Advance-Toward the young male, he immediately Retreats-From. (Maasai Mara, Kenya)

Emo in musth (on the left) and Teejay not in musth (right) Advance-Toward one another. When they are about 25 meters apart Teejay stops Heah-High but with a slight Chin-Out posture. Teejay one more step toward Emo and stops again, Foot-Lifting as Emo closes the gap to about 10 meters. Then Teejay turns and Runs-Away and Emo Runs-After him. As they begin to run we see clouds of dust rising from their backs. We hear the sound of them running and their ears flapping and we can hear Teejay give a V8-Rumble.

On the spectrogram we find a big increase in sound between 4 and 20 Hz. Elephants at some distance away would be able to pick up this acoustic signal between 8-20 Hz as well as its matching seismic signal. (Amboseli, Kenya)

Early in the morning we met Emo in musth seeing off Teejay. Then some kilometers away we found Pascal. Over an hour or more Pascal was Listening and Musth-Rumbling. He seemed to hear Emo and came out meet him. In this clip he Advances-Toward Emo who Retreats-From. Pascal follows him over a kilometer or so. (Amboseli, Kenya)

Two teenage males walk through a family group in a 'pushy' manner. The one in front is wearing a collar. He Advances-Toward an adult female and Ear-Folds forcing her to Back-Away. (Amboseli, Kenya) 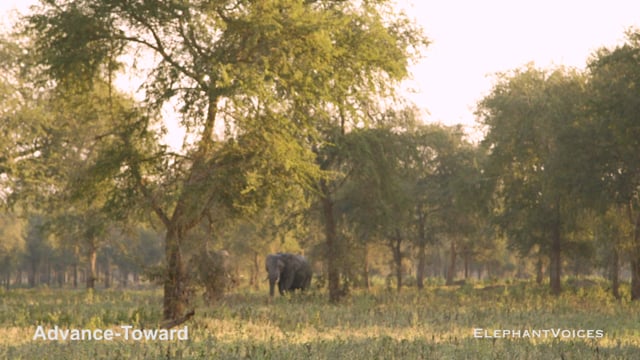 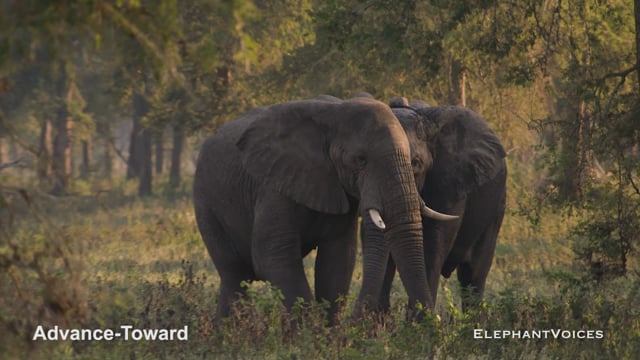 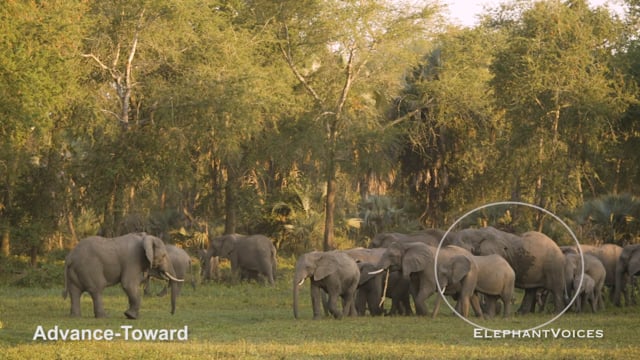 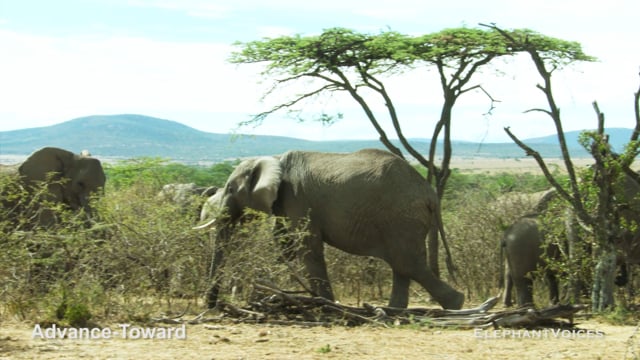 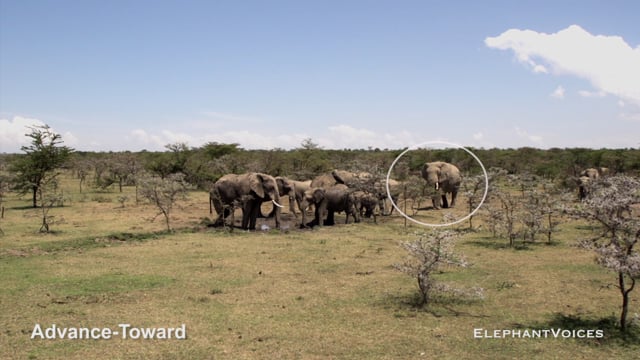 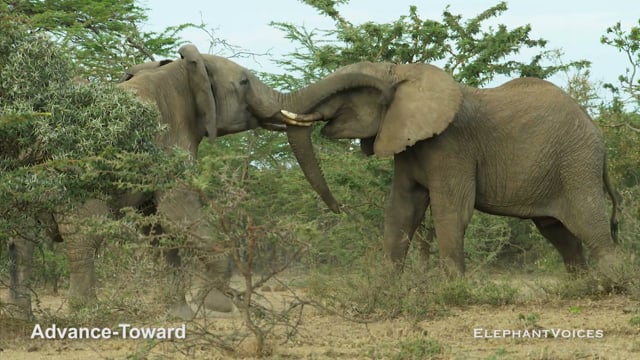 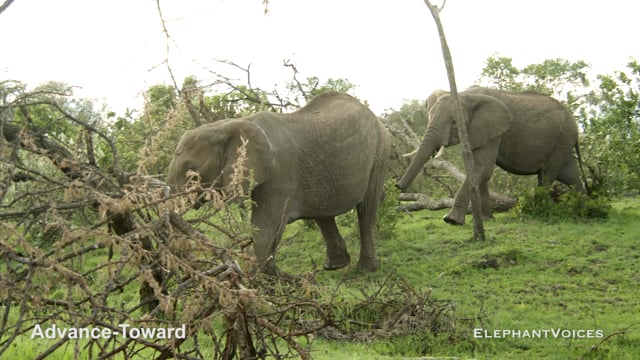 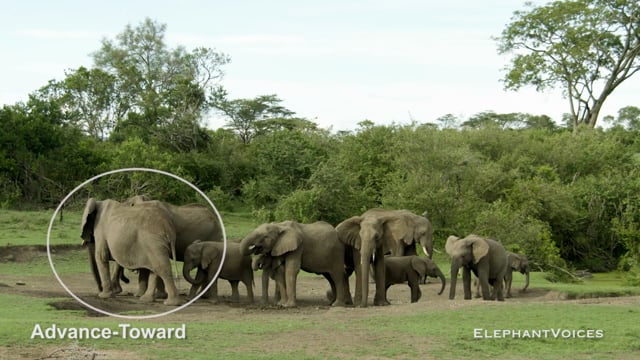 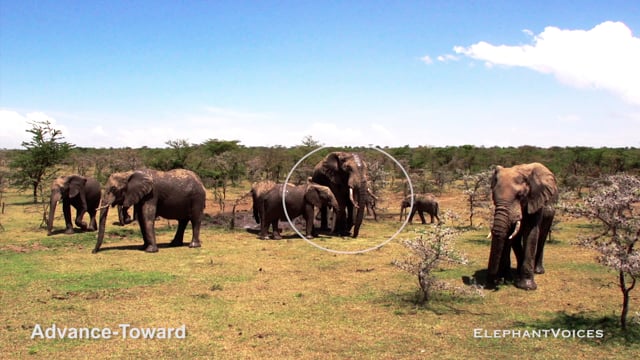 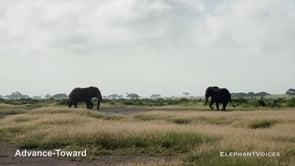 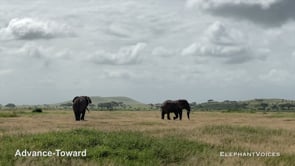 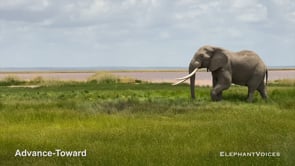 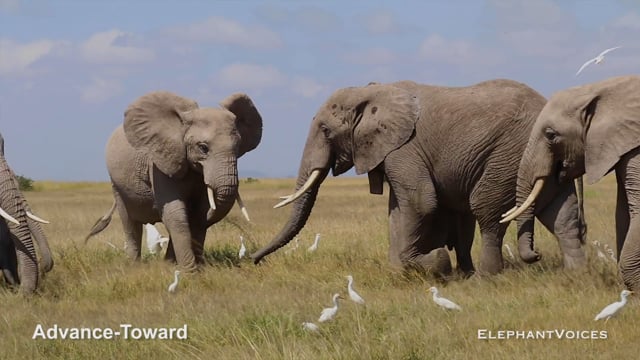