Joyce Poole has studied the social behavior and communication of African elephants for over thirty five years and has dedicated her life to their conservation and welfare. The inspiration for her life's work came from a childhood in Africa, a father with a love of nature, and a lecture by Jane Goodall that she attended at the age of eleven. She began her work with elephants at the age of 19 in Amboseli National Park studying there under mentor, and Director of the Amboseli Elephant Research Project, Cynthia Moss. 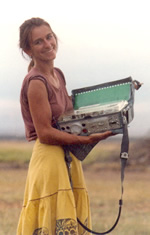 In Amboseli, Joyce's early work focused on the social and reproductive behavior of male elephants. Discovering in 1978 that African male elephants experience a heightened sexual and aggressive period known as musth, led her to carry out detailed study of their socio-sexual behavior. In the mid 1980s, she extended her study to elephant communication, first concentrating on the signaling patterns between males in musth. The very low frequency sounds produced by male elephants led to work with Katy Payne, and the finding that, like their Asian cousins, African elephants use sounds below the level of human hearing. Together, Joyce and Katy turned their attention to the role of infrasound in elephant long-distance communication.

In the late 1990s, Joyce began to document the vocal repertoire and body language of African elephants discovering. She found, in the process, that elephants are capable of vocal imitation.

Scientific knowledge used to protect elephants and their welfare

Joyce's elephant research has not been confined to the realm of academic journals. Data from surveys in 1989 showing that the killing of elephants for ivory was destroying the social fabric of elephant society were used in the campaign which successfully banned the international trade in ivory. Understanding of male elephant behavior, and the importance of social learning and role models in elephant society has been key to the adoption of more humane elephant management practices.

Between 1990-1994, she had the opportunity to head the Elephant Program of Kenya Wildlife Service, working with and training many of the men and women who hold key elephant management positions in Kenya today. 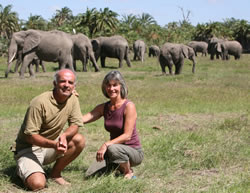 During the latter half of the 1990s, Joyce returned to her long-term study of elephants believing that she could best influence their future by sharing her knowledge and enthusiasm. Since 2000, she has continued her elephant communication work with Norwegian husband and colleague, Petter Granli, and together they founded ElephantVoices (initially Savanna Elephant Vocalization Project) in 2002. Petter's creativity, technical skills and his background in marketing and communication influenced their decision to share the voices of elephants via the internet in the belief that better understanding could help change public perception and improve the survival prospects for elephants. ElephantVoices' first website was launched in 2002. In September 2008, ElephantVoices was registered as a non-profit charitable organisation (501(c)(3)) in California.

A second generation ElephantVoices' website launched in 2009, with its associated databases of elephant sounds and gestures, was the fruit of an idea planted almost a decade before and the result of many years of work in association with numerous dedicated colleagues and friends mentioned on our Collaborators page. In October 2013, working with long-term Kenyan collaborators from Verviant a re-designed ElephantVoices.org was launched.

ElephantVoices has since its inception been working worldwide with issues, policies and cases related to elephant welfare, and initiated in 2008 The Elephant Charter. In late 2011, the document Sanctuary for Elephants - Overall Principles was launched, partly related to ElephantVoices efforts toward the establishment of an elephant sanctuary in Brazil. This initiative led to the establisment of Global Sanctuary for Elephants in 2013, headed by Scott and Kat Blais and with ElephantVoices as a founding partner. Meanwhile, with Junia Machado as a vital force, Santuário de Elefantes Brasil (SEB) was established in Brazil. In June 2015 SEB purchased a stunning 2800 acre propery in Chapada dos Guimarães, Mato Grosso, and in October 2016 Maia and Guida arrived at the Sanctuary as the two first elephants. Many more will during the next few years get this groundbreaking Sanctuary as their new home.

In 2010, ElephantVoices initiated a citizen science conservation project in the world renown Maasai Mara, Kenya, part of the key Serengeti-Mara ecosystem. Known as Elephant Partners, the project on this for both Kenya and Tanzania vital elephant population was partly based on the use of smartphone and web technology for data collection. The following year Joyce and Petter began an elephant monitoring, conservation and research project in Gorongosa National Park, Mozambique.  Some of our work in Gorongosa was presented in the six-part documentary series Gorongosa Park: Rebirth of Paradise (in episode 2 and 5) aired on PBS and National Geographic.

Coming of Age with Elephants is a National Geographic documentary that premiered in 1996, and is based on her book with the same name. The documentary was filmed by her brother Bob Poole - the clip above is posted on his Vimeo Account.